If we assume, naively, that all people would be equally willing to work to their fullest ability no matter what the tax rate is, then the government's revenue grows linearly with the effective tax rate: 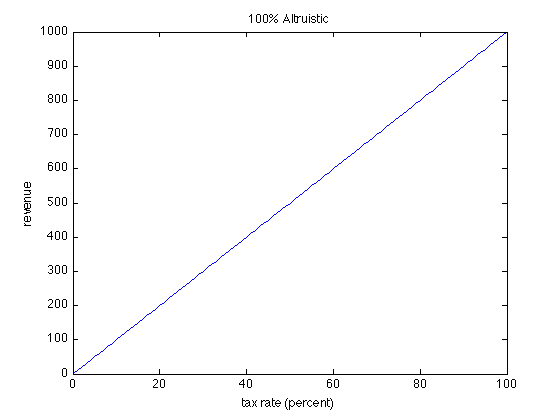 Supply-side economists assert that there is no incentive to work if the tax rate is 100%. If we assume that the fraction of people willing to work to their fullest potential drops linearly from 100% when tax rates are zero to 0% when tax rates rise to 100%, then we arrive at the famous Laffer curve: 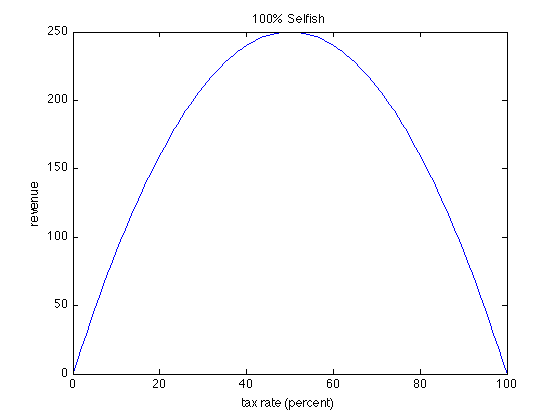 However, the assumption that the amount of work done drops to zero as the tax rate goes to 100% is absurd. Taxes are paid to the government and then the government spends the money on its people. So, while one might be unhappy that they don't get to decide how the money is spent, it will get spent and each person will benefit from that spending. Hence, while it is true that the incentive to work decreases with increasing tax rates, it does not decrease all the way to zero unless everyone in the country is so selfish that they refuse to lift a finger if someone else has the final say on how their hard-earned money is spent. No one is 100% selfish like that.

Look, for example, at communist countries. In such countries essentially everything that a person "makes" belongs to the state. This is equivalent to a 100% take rate. While such countries are not economically competitive with free democracies, the people in those countries do work. They work because they understand that to be able to eat and have shelter and other basic necessities requires that they work. The government can only provide those things if the people work. Yes, they don't work to their fullest potential. Yes, it is annoying not to have the freedom to decide how to live your life. But, work they do. So, the original Laffer curve is completely bogus.

Let's make a more realistic curve. To this end, assume that there are two types of people:

If half the people in the country are altruistic and half are selfish, then the revenue versus tax-rate curve looks much different from the one Laffer drew: 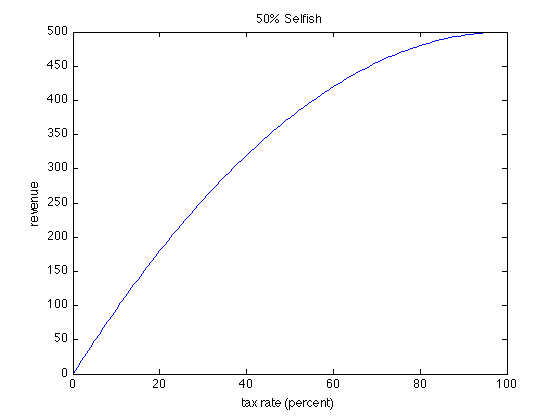 There is no point beyond which the curve begins to go back down. For such a feature, it is required that we assume that more than half the population is selfish: 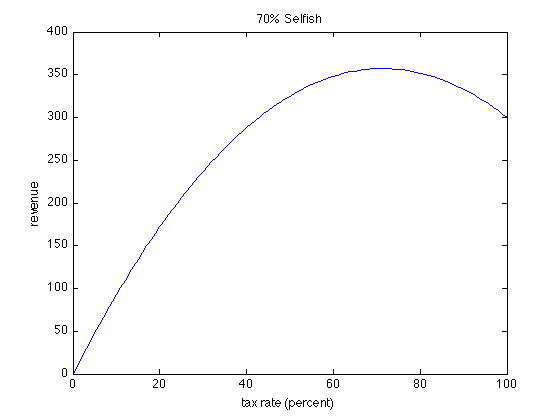 The original Laffer curve assumes that everyone is selfish. And, even in this case, the curve does not begin to go back down until the tax rate is greater than 50%.

The bottom line is this: cutting taxes when the current effective tax is way below 50% can only decrease revenue.